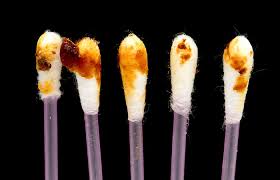 Earwax is a waxy substance that is secreted in the passage of the outer ear and it prevents dirt and bacteria to get inside the ear canal. This yellowish sticky substance is disgusting and no one wants to talk about it, but it actually is extremely important for the body. Medical experts explain that the color and the texture of the earwax can say a lot about the overall health.

Even though it is gross, next time you clean your ears you should take a closer look at the earwax.

If the earwax is soft in texture and has a yellow color it means it is normal and healthy. It is important to mention that children produce much more earwax than adults.

According to recent scientific studies, the earwax provides a clue of the genetic ancestry of the person. Scientists explain that people of Asian decent have dry earwax, while people of African or European descent have sticky or “wet” wax. In other words, the texture of the earwax actually indicates that there is “a genetic adaptation to the climates in which our ancestors evolved”.

scroll down to next page

This div height required for enabling the sticky sidebar